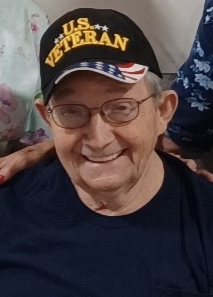 Mr. Duncan, 84, of Linden, died Thursday, January 5, 2023, at Maury Regional Hospital. A funeral service was held Sunday, January 8, 2023, 2:00 p.m., in the chapel of Young Funeral Home, with Jerry Mercer officiating. Burial was at Dr. O.A. Kirk Memorial Cemetery. He was born in Lobelville, the son of the late Buford Andrew Duncan and Vera Pearl Barham Duncan. He was a U.S. Army Veteran, retired from Johnson Controls TEAMLINDEN, where he worked many years, and was a member of Brush Creek Church of Christ. In addition to his parents, he was preceded in death by his wife, Rosa Lee Duncan; a son, Billy Duncan; and in-laws, Sara and Leon Bell. Survivors include his sisters and brothers, Nola Chandler of Columbia, Hazel Rice of Paris, Arkansas, Adren Duncan of Little Rock, Arkansas, and Marvin (Brenda) Duncan of Rockford; and caregivers, Julie and Austin Kephart of Waynesboro.