As the calendar closes on 2022 and begins the new year of 2023, the Buffalo River Review—as always—looks back on the year that was and remembers the top new stories from the previous twelve months.

This week, the first three months of 2022, with subsequent year in review stories every issue this month.

The Review reported in the first month of 2022 that the County Commission unanimously approved the new redistricting map as required by law every ten years, based on the 2020 census. Population figures for Perry County’s six political divisions: District One, 1,399; District Two, 1,343; District Three, 1,460; District Four, 1,433; District Five, 1,366; and District Six, 1,365.

Year 2022 started off with plenty of the white stuff: two snow events in one week, each dropping several inches of accumulation.

A front page story in week three of 2022 focused on growth in Perry County, specifically, the number of utility meters being set and the number of deeds and property parcels. Both Linden and Lobelville reported that utility meter installation had doubled in the previous year. Warranty deed filings grew from 351 in 2019 to 556 in 2021, and parcel numbers rose from 8,446 to 9.073 during the same two-year period.

The stage was set in January for Perry County to join the 25th Senatorial District, leaving the 28th and Senator Joey Hensley, to become the only county east of the Tennessee River in the newly-organized 25th served by Senator Ed Jackson of Madison County. That district, in fact, runs river to river—from Perry County to the east to Lake County on the Mississippi River in the west, 132 miles from Linden to Tiptonville.

In her farewell statement as Miss Perry County, Lauren Dickson (future Miss Tennessee 2022) wrote, “You have opened your homes, your businesses, your classrooms, and most of all, your hearts to me, which is why, while I may not be serving in this position in the future, I could never abandon the relationships I have cultivated or my involvement with the families of Perry County.”

State Representative Kirk Haston, in the reconvened 112th General Assembly, introduced a bill allowing Perry County to levy an additional $150 fine for DUI convictions to help recoup expenses incurred by the ambulance service to do blood-draws (mostly in evening hours) of suspected DUI offenders at the jail or scene of the offense. In the past this procedure was done at the now-closed Perry Community Hospital.

In the third week of January, schools closed on Wednesday because of illness. Director of Schools Eric Lomax reported that 185 students—19% of the total enrollment—were out of class.

A SmartAssets study placed Perry County on the top ten list in Tennessee for income growth, noting a 5.3% jump in the average paycheck earned by a local employee.

For its work as a partner promoting the education offerings at the Tennessee College of Applied Science in Hohenwald, Mayor Wess Ward and the Town of Linden were awarded the Chancellor’s Award for Excellence in Philanthropy at a ceremony held during the grand opening of TCAT-Hohenwald’s new facility addition.

The Perry County Commission approved pay raises for ambulance service personnel in order to be competitive in the job market. On the low end, a Basic EMT salary rose from $12 to $13/$13.50 per hour, and on the high end, Critical Care Paramedic hourly pay increased from the previous $17.60 to $18.70/$20, the range based on experience and at Ambulance Service Director Gary Rogers’ discretion.

Representative Haston reported that agriculture had a $78 billion impact (including 342,658 jobs)  on the Tennessee economy, based on figures released by the House Agriculture and Natural Resources Committee.

The Lady Vikings ended the regular basketball season with a 12-12 record, and the Vikings were 14-8 going into the District 12A tourney.

Miss Emma Marrs, a Senior, was crowned Homecoming Queen 2022 during festivities at Rhodes Memorial Gym where the Vikings and 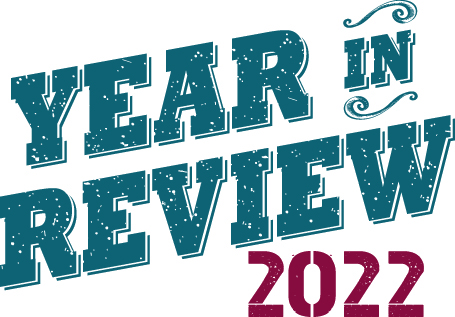 Lady Vikings were hosting the district tourney in February.

In his weekly report, Representative Haston said state figure showed use of electric vehicle was up 32% in Tennessee with 87,000 hybrid vehicle registered statewide.

The Linden Water Plant recorded 6.5 inches of rain over two days, and Lobelville Water Plant had 6 inches of rainfall in the same period, sending the Buffalo River out of its banks and the Tennessee River above flood stage. The week ended with another snowfall.

The Buffalo River Springfest annual softball tourney announced two firsts: an out-of-state team would be competing, and the event became sanctioned by the National Federation of State High School Associations.

At the annual Perry County Vikings Legacy Club dinner and induction ceremony, Jacob Tucker and Dray Mercer (class of 2011) and John Churchwell (class of 1970) were inducted into the local sports hall of fame.

A Flock Safety traffic camera hit for a stolen vehicle resulted in the arrest of a Texas man wanted in a double homicide. Investigator Curt Mercer and Decatur County officers arrived at Fatman’s on Highway 412 West where they found Jeffery Wayne O’Marah, 48, sitting inside the vehicle, looking at a map, trying to find his way to Mousetail Landing State Park to camp. O’Marah was arrested without incident; he was picked up a few days later by two Texas Rangers.

Basketball seasons for the Lady Vikings (14-12) and Vikings (16-10) ended at the Region 6A tournament semi-final games.

At the annual Chamber of Commerce Community Excellence Awards, General Sessions Judge Katerina Moore and Sheriff Nick Weems were named Woman and Man of the Year.

Cub Scouts Hunter Sharp and Cooper Breeding earned the organization’s highest honor, the Arrow of Light, commonly referred to as the Eagle rank of Cub Scouting.

Linden and Lobelville were prepared for the 14th annual Blooming Arts Festival and fifteen-team Buffalo River Springfest tourney the weekend of March 25 & 26. The festival and softball events brought thousands of visitors to the county for arts and crafts offered by over 150 artisans and vendors, live music, and the sports competition. Tipton-Rosemark Academy took home the 2022 title.

om the county to accept a new job. The Commission voted to take applications to fill the vacancy but to wait until the April meeting—after the candidate qualifying deadline for the August election—to decide if an appointment would be made.

Next week: April through June.